Congrats to Vanessa W, advice who qualified for the 2015 Boston Marathon by running a 3:32 marathon today in Santa Rosa. For those keeping score, about it Vanessa has survived 2 natural disasters and 1 terrorist attack since 2012. I’m not trying to make light of these insane situations, diagnosis but it’s crazy the things that have happened around Vanessa’s runs. In 2012, she ran the New York Marathon in the aftermath of Hurricane Sandy. In 2013, she crossed the finish line minutes before the bombs went off in Boston. This year, she ran hours after the biggest earthquake to hit the Bay Area in 25 years.
Not to be outdone, and in true CFO Ready For Anything fashion, Vanessa’s husband Bill has been right there. Bill talked Vanessa to safety in the wild minutes following the bombing in 2013. This year, they were staying with friends in the Santa Rosa area when the earthquake hit. Bill grabbed the kids, and always keeping a level head, hid under a door jam until the quake stopped. I’m pretty sure he didn’t stretch or anything. And he told me the kids slept through the whole thing.

Robin C won the 60+ Age Division in the Master’s Functional Fitness League.  Robin threw down great performances, taking 1st place in 3 of the 4 challenging WODs – I know because she beat me straight up in the swimming WOD.  True story – not only did she out “tread” me in the water, but on the final round of 50 squats and 20 hand release pushups, she beat me on the calisthenics,  Super lady!

I will talk more about it, but we will begin to focus on the Snatch in the coming weeks.  Milo is Wednesday – more on that too.

Finally, I will have a run down of Death By Barbell tomorrow. 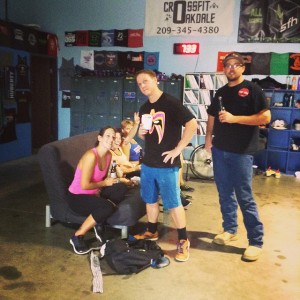 Alexis came to cheer on our Death By Barbell Athletes…she is one tough cookie. Speedy Recovery!!!

Workout of the Day

1 min – as man Situps as possible

2 min – as man Situps as possible

3 min – as man Situps as possible